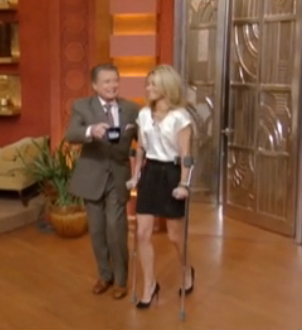 We’ve all had the experience of a little soreness after wearing a pair of high heels for too long. But TV personality Kelly Ripa is taking the concept of suffering for fashion to a whole new level. The “Live with Regis and Kelly” host was seen on air recently wearing a pair of 4-inch black pumps while using crutches. According to reports, the star is suffering from a stress fracture in her hip, which has caused her to need crutches temporarily. Viewers and Internet chatters were all abuzz over the Rips’as shoe choice – many saying that she should have chosen something more “sensible.” Chances are, Ripa had a nice pair of flats to slip on once the camera’s stopped rolling… we hope.