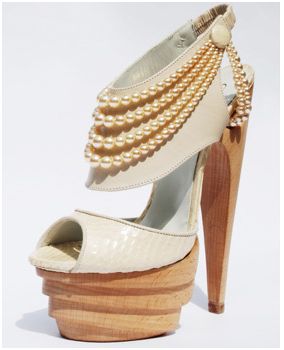 Sophia Grace Webster broke onto the international scene when she won a design competition held by high end department store Browns in 2009. The designer wrapped up an MA in Womenswear at the Royal College of Art in London only this year, but she’s already playing in the big leagues as an assistant designer for Nicholas Kirkwood. The shoe seen above is a project for Manolo Blahnik, according to Webster’s web site. Another of Webster’s concepts uses Swarovski crystals. It’s interesting to see the difference between what the designer sees in her head versus what is created in real life. A basic black pump is essential for any woman’s wardrobe, but they can’t take the place of a super decked out pair of glitz and glam high heels. Sophia Grace Webster is clearly a designer on the rise who’s poised bring us some incredibly opulent shoes that will satisfy our appetites for the occasional over-the-top look.