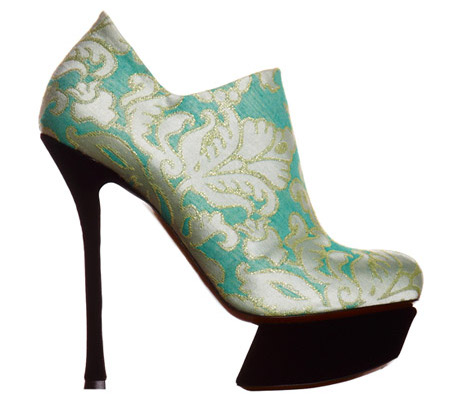 Paris in the 1920s is the inspiration for Nicholas Kirkwood’s fall and winter 2012 high heel collection and, as usual, the star designer’s creations dazzle and inspire. Kirkwood’s over-the-top approach has been worn by and wowed celebrities like Beyonce, SJP and Gwen Stefani and is the perfect go-to brand to add a true highlight shoe to your wardrobe.

The muse for the designer’s fall and winter 2012 collection was Midnight In Paris, the 2011 romantic comedy written and directed by Woody Allen. From there the theme moved to embrace the spirit and fashions of Paris in the 1920s. The designer recently explained to Refinery 29 that “it’s almost slightly dreamy. It’s about romance, in a way.” The decadence of the period is very much on show in the collection, which features velvets, vintage brocades, cubist faces and even high heels with ponytails sprouting out the back. The inspirations included Picasso, and the collection includes boots, pumps and the signature Nicholas Kirkwood platform heels. Nicholas Kirkwood fans should snap up the designer’s platforms while they can though as Kirkwood told Grazia last week that the fashion focus is not so much about chunky platforms anymore. He noted a return to more feminine times was imminent and that “the trend now is for experimentation on the basic pointy pump.”