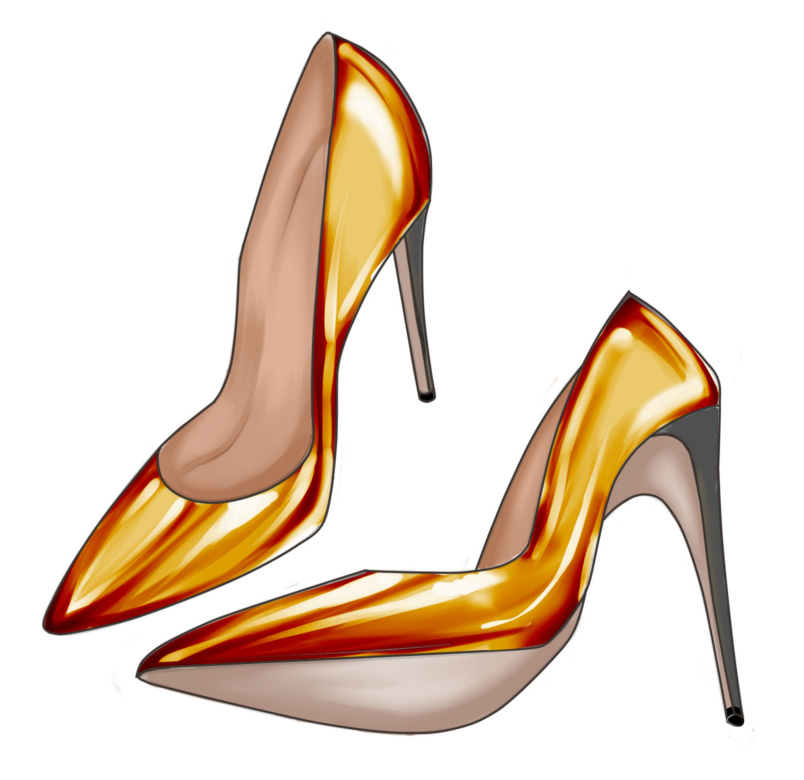 There are few things in life that rival the feelings a woman gets when she finds a perfect pair of heels.  It starts at an early age, and intensifies as we get older.

Perhaps it is the way the style can transform an ordinary outfit into something extraordinary.  The simplest dress becomes an individual expression.

A woman’s legs are suddenly lengthened and her figure appears more lean.

It is little wonder then that heels have a long and detailed past. Royals, prostitutes, celebrities and even men have played an important part in the history of high heels. We take a snapshot look at this below. High heels date far back in history, with murals in Ancient Egypt depicting them as long ago as around 3000 BC. Back then, lower class groups were typically barefoot or wore simple coverings while the upper crust wore heels as a symbol of status and prosperity.

Egyptian butchers wore heels to prevent them from stepping in blood and entrails of the animals they killed.  And the ancient Romans were also great purveyors of the early high heel.

Though more practical in their footwear, kothori, or platform sandals were worn primarily by actors to convey status of their characters, including men.

In Rome, prostitutes wore these heels as a way to make themselves look more appealing to their customers as well as a way to identify what they were.

Made from wood and cork, these platform styles are influential even in our modern times.

Finally, those working in the sex trade in Japan were identified by the heels they wore as well.  The tongue in cheek term “hooker shoes” is not so far off from this early use of heels.

Meanwhile Japanese men and women of society wore getas, a 2 inch wooden platform sandal that was thought to keep kimonos from dragging in the mud. Moving into Medieval times, pattens, or wooden soles, are clearly an influence for what became a high heel.

Pattens were actually made to attach to more extravagant shoes worn by men and women in order to keep them free of mud or other debris found on the street.

In Turkey during the 1400’s, the chopine was developed and worn regularly by women of stature.  The heel was anywhere from 7 inches to 30 inches tall, making it difficult to walk without the aid of a cane or a servant holding on.

Like a miniature stilt, the heel was usually wood or cork and the shoe decorated with extravagant tassels, beads and woven fabrics.

Imagine trying to manoeuvre this kind of shoe on a crowded sidewalk! Chopines continued to be popular throughout Europe until the mid 1600’s.

The Venetians became quite well known for these outlandishly high shoes, causing an observer to comment the heel was “invented by husbands who hoped the cumbersome movement [that] entailed would make illicit liaisons difficult”.

Comparing the women to maypoles, this idea of a fashion statement dwindled because of the inability to walk.

Some historians felt that the chopine, which was used by concubines throughout Turkey and China, was a preventative measure to keep the women from escaping their life in the harem.

High heels as we know them were formally discovered as fashion during the 1500’s when they evolved as a move away from the heavy heel of the chopine.

When Catherine de’Medici (1519-89) traveled from Italy to marry the Duke of Orleans, she brought along the first high heels to be seen in France.

Catherine was a small woman, and not considered attractive.  It is believed she needed the extra height to be able to look her future husband, also the future King of France, straight in the eye.

High heels became associated not only as fashionable, but as a staple of the wealthy. By 1580, high heels were being worn by the wealthy and noble women as well as men, creating the term “well heeled” to describe their social status.

Because of the popularity of high heels, shoemakers were now tasked with creating different shoe soles.  Made from wood or cork, the towering heels, many up to 5 inches, made women’s legs swell uncomfortably.

The angle of the heel was so awkward that the wearers had to walk with a very stiff, puppet-like gait to prevent falling over.

We think nowadays that our heels are often uncomfortable – think how much these women had to totter! In the early 1700’s, France’s King Louis the XIV would wear heels decorated with intricate battle scenes. The king decreed that only members of nobility could wear heels of red, and that no one’s heels were higher than his own.

As the century progressed, heels grew higher and more slender, creating a sensualism as many women were using high heels along with corsets to sensually shape their bodies.

In 1791 during the French Revolution, Napoleon even banished high heels in an attempt to create equality.

The high heel as we know it would lie nearly dormant until the 1930’s, when a new era emerged, particularly in the Western New World – America. The late 1800’s Victorian era gave some influence to the high heel by exaggerating the arch of the foot.

The low heel began to rise, and while many touted the health benefits – better posture and less stooping, others accused the shoe of being “sexually aggressive.”

Some even associated the heel with the cloven foot of the devil or with witchcraft.  Nevertheless, the first high heel shoe factory in the United States opened in 1888, stealing its influence from the European designs. The 1920’s brought back the “Louis” heel, taking its influence from the heels worn by Louis the XIV.  With the shorter hemlines, this delicate heel complemented the style.

As the 1930’s rolled around, so did the depression and heels became lower and wider.

However, Hollywood embraced the higher heels, adding glitter and luxury to the likes of Ginger Rogers whose feet were the focal point as she danced.

World War II inhibited the mass production of heels, making them only for the wealthy once again as production was in short supply.

Birth of the stiletto heel

In the 1950’s, emerging designers showed the world a new term for dressing the feet, by inventing a thin metal rod that supported the heel.

The Stiletto, taken from the Greek word “stylos” or pillar, became an instant sensation. As the feminist movement gained steam in the late 60’s, stilettos fell out of favor as women believed the male designers were trying to cripple them, both emotionally and physically.

Feminists felt that the high heels indicated a submissive role, not allowing women to run away if attacked.

The heels dropped in height and became thicker, with the toe squared off.

As the 60’s fell to an end and anti-establishment sentiments rose, the heels revived the platform style, influenced by the chopines of earlier. Think John Travolta and Saturday Night Fever’s influence on fashion – men embraced the platform just as much as women if not more.

As the popularity of glam and punk rock rose, acts such as David Bowie’s Ziggy Stardust and KISS took the platform to new heights, literally. The 80’s ushered in a new authority for women as the power suits took hold.

They wanted their high heels to look professional, yet symbolize that they could be sexy while “meaning business”.

Excess was best in the 80’s and the influence of TV shows such as Dynasty gave women the confidence they needed to wear them.

The rise of Manolo Blahnik gave new meaning to how fashionable heels were, paving the way for the sky high heels of the 90’s and the new millennium.

We know how much Carrie loved her Manolos in Sex in the City, which paved the way for an influx of incredible designer shoes.  No heel was too high or too extravagant, and the shoe industry exploded with billions of dollars in sales.

A brief history of high heels It’s hard to believe that the gladiator style of today steals its influence from so many years ago, or that an Egyptian ankh is still a prominent motif for a delicate sandal.

Stilettos continue to rule the runways with their sexual nature.

With so many choices, women are able to express themselves as an individual through their heels. The new stilettos are nearly works of art, such as the late Alexander McQueen’s crab claw influenced shoe.

Influences come far and wide, and no material seems off limit.  High heels have proven that they are here to stay.