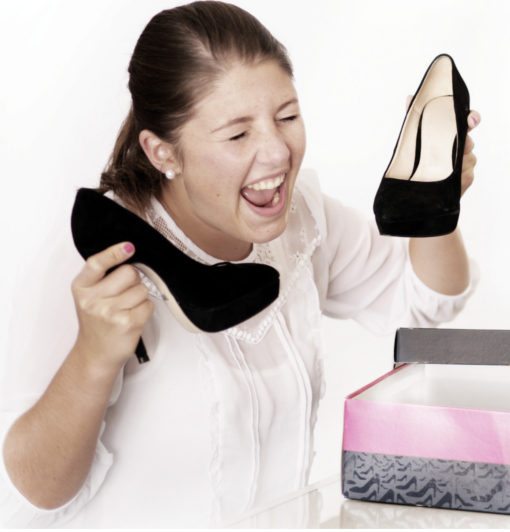 A rough statistic for the return rate of shoes purchased over the internet is often quoted as between 20% and 35%.

That is, one pair of shoes is returned for roughly every three to five sales.

That may seem high. However some sources cite return rates of 50% or higher.

Estimating the “return rate” for shoes purchased online is quite a difficult issue because retailers do not often speak out about the specific rate. We analyse the return rate data below.

The only shoe-specialist retailer to have spoken out about its return rates is Zappos shoes, way back in March 2010. Zappos said that on average customers returned 35% of the items they ordered.

At this time, Craig Adkins, then vice president of services and operations at Zappos, explained to Internet Retailer that the company’s best customers returned 50% of their items:

“Our best customers have the highest return rates, but they are also the ones that spend the most money with us and are our most profitable customers.”

As this rate seems high, it may be explained by the fact that Zappos practically begs its customers to take products to try on – and to return them if they don’t.

Then again, another retailer of high heels which has also quoted its return rate at 50% is German merchant Zalando. On 18 July 2014, Zalando told readers of its blog that:

“Our return rate is around 50 percent across all markets and categories.”

Zalando’s disclosed return rate does not distinguish between shoes and other apparel, so it is not a guide to only the shoe return rates.

It is notorious that fashion items typically have the highest return rates of all goods bought online.

Some guide can be taken from research conducted by the University of Regensburg in 2013. This study found that online retailers that were active in the clothing sector indicated a return rate of between 25 % and 50%.

This figure is very broad so it is also not particularly helpful.

Another 2013 study also addresses the issue, this time by Copenhagen Economics (E-commerce and delivery). This study also didn’t give a clear indicator of return rates, saying simply that they ranged between 1% and 50%.

The study did at least indicate that shoes were amongst the highest items returned, stating:

Actual return rates range from less than 1 per cent up to 50 per cent, with the majority of e-retailers experiencing return rates between 1 and 10 per cent…

The highest return rates are experienced by e-retailers selling clothing, shoes and jewellery, as well as electronic equipment and household appliances.

The Copenhagen Economics study also re-inforced the Zappos model: namely that high return rates can be a good thing for retailers of shoes. It said:

A high rate of returns is not necessarily a sign of consumer dissatisfaction.

In fact, a high return rate can be part of a successful business model for e-retailers selling apparel, shoes etc. By offering free delivery and free returns, e-retailers move the fitting room from a physical shop to the customers’ home.

What are the problems for retailers with high return rates?

According to a worldwide study conducted by Pitney Bowes in 2011 (E-commerce survey provides roadmap), 20% of online shoppers consider return policies the most important factor when shopping online in the US, UK, Australia, Brazil, Canada, China, France, Germany, Japan and South Korea.

With many retailers offering “free returns” to cater for this audience, the cost and difficulty of high return rates can become a problem for retailers.

So what are some of the major issues with this?

Perhaps the most important consequence of a high return rate is that it will result in  double-handling as goods are re-received into warehouses.

The work involved here involves checking that each product being returned has not been damaged or worn by the person returning it.

An associated issue, particularly with the return of designer shoes, is “switch fraud.” This happens when a customer orders an expensive pair of designer shoes and returns them – but before returning them swaps the designer items for cheap knock-off replicas.

Major retailers quickly developed processes to handle “switch fraud” but they involve extra work – and therefore cost – for the retailer.

A second problem with the return of goods is that it will complicate accounting processes, and may include processing fees when a credit card payment is reversed. The retailer will have to absorb these costs.

A final issue for retailers is that there is also the cost of the actual return (ie the postage) where the retailer has offered free returns.

There may not be a simple answer to these issues. What we do know is that retailers of high heels must account for a significant percentage of their goods to be returned by online shoppers.

And we also know that good returns policies (usually “free returns”) are a key driver for shoppers when deciding whether to purchase. As retail heads more and more towards an online model, it would be foolish to think that is likely to change.