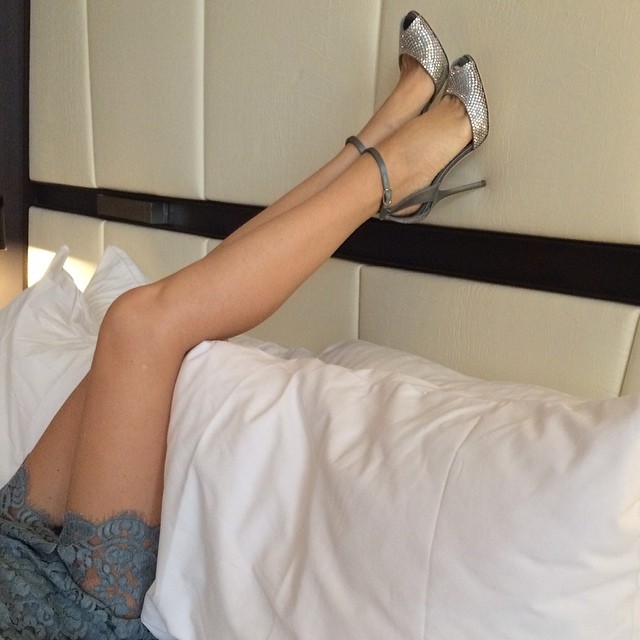 Kylie Minogue has been rocking stilettos since she stepped out of Charlene’s workboots in Neighbours, which is pretty much forever. The Aussie star has always posted plenty of high heel pictures on her social media sites and her 2014 shoe collection is better than ever. Is it the best in the world? Maybe. Are we jealous? Yes!

Below are the high heel pictures Kylie has posted on her Instagram page this year.

On 26 February 2014 Kylie’s shoe of the day (tagged #shoeoftheday) was a pair of glittering Dolce & Gabbana stiletto sandals (see below).

Kylie Minogue’s shoe of the day on 7 February 2014 was by Casadei. She’s wearing the designer’s iconic Blade pointed toe pump in pink nappa leather. Blade has a 4.5 inch silver laquered heel made from real steel, with a 0.4 inch concealed plateau. The pink stilettos retail from Casadei for around $690 (€620)

Kylie’s shoe of the day for 3 February 2014 was a versatile and understated black Giuseppe Zanotti pump. Her Instagram selfie was taken during a photo shoot for New York based Australian fashion photographer Will Davidson.

Last but not least come the Christian Louboutins. Kylie nominated her red soled stilettos as her daily shoe pick on 29 January 2014. The shoes are the towering 120mm (5 inch) So Kate heels, seen here in a multi-colored design on a python skin upper. O.M.G.